This is a followup article to Confidence in machine learning, reading that one first is probably require in order to understand some of the context behind these experiments. That being said, I think the results are potentially interesting on their own.

All the code and data can be found here: https://github.com/George3d6/Confidence-Determination

If you want to but are unable to replicate some of this let me know. Everything random should be statically seeded so unless something went wrong you'd get the exact same numbers I did.

To back up my ruminations on the idea of confidence determination I will do the following experiment:

Take a fully connected network (M) and train it on 4 datasets:

The first dataset (a) is a fully deterministic dataset dictated by some n-th degree polynomial function:

We might also play with variation of this function where we remove the power or the coefficient (e.g. f(X) = 1*X[1]...n*X[n] and f(X) = X[1]^1 + ... X[n]^n). The choice is not that important, what we care about is getting a model that converges almost perfectly in a somewhat short amount of time.

lim1 and lim2 will be picked such that, for randomly generate values in X between 1 and 9, the split between the potential values of Y in the dataset is 33/33/33.

The second dataset (b) is similar to (a) except for the value of Y, which is:

The value of lim1 will be picked such that the initial split is 50/50, given that we are using the 1st-degree variable to introduce this irregularity in 1/9th of samples, I assume the final split will be around 11/44.5/44.5.

These 3 datasets are symbolic, though not fully representative, of 3 "cases" in which I'd like to think about the idea of confidence:

a) Represents a case where the datasets follow a straight forward equation which, in theory, the model should be able to approximate with ~100% accuracy.

b) Represents a case where the datasets follow a deterministic equation, but this equation has an irregularity which breaks its linearity in several places, which seem "random" when looking at the final value but obvious when looking at the input independently.

I want to test some solutions here and evaluate them based on six criteria:

The models evaluated will be:

I will run each model through all datasets and compare the results. Running model M alone serves as a sanity benchmark for the accuracy values and is there in order to set the maximum training time (4x how long it take to "converge" on validation data) to avoid wasting too much time on setups that are very slow to converge (these would probably be impractical).

I will also use multiple datasets, the combinations will be:

For each dataset, I will generate a training, validation, and testing set of equal size, consisting of either ~1/3 of all possible combinations or 10,000 observations (whichever is smaller), without any duplicate values in X.

Barring issues with training time I will use the 6th-degree polynomial with coefficients as my example, as it should be the most complex dataset of the bunch.

Though, I might use the other examples to point out interesting behavior. This is not set in stone, but I think it's good to lay this out beforehand as to not be tempted to hack my experiment in order to generate nicer looking results, I already have way too many measures to cherry-pick an effect out of anyway.

A few days later, I have some results:

Here they are (for the 6th degree polynomial with coefficients dataset): 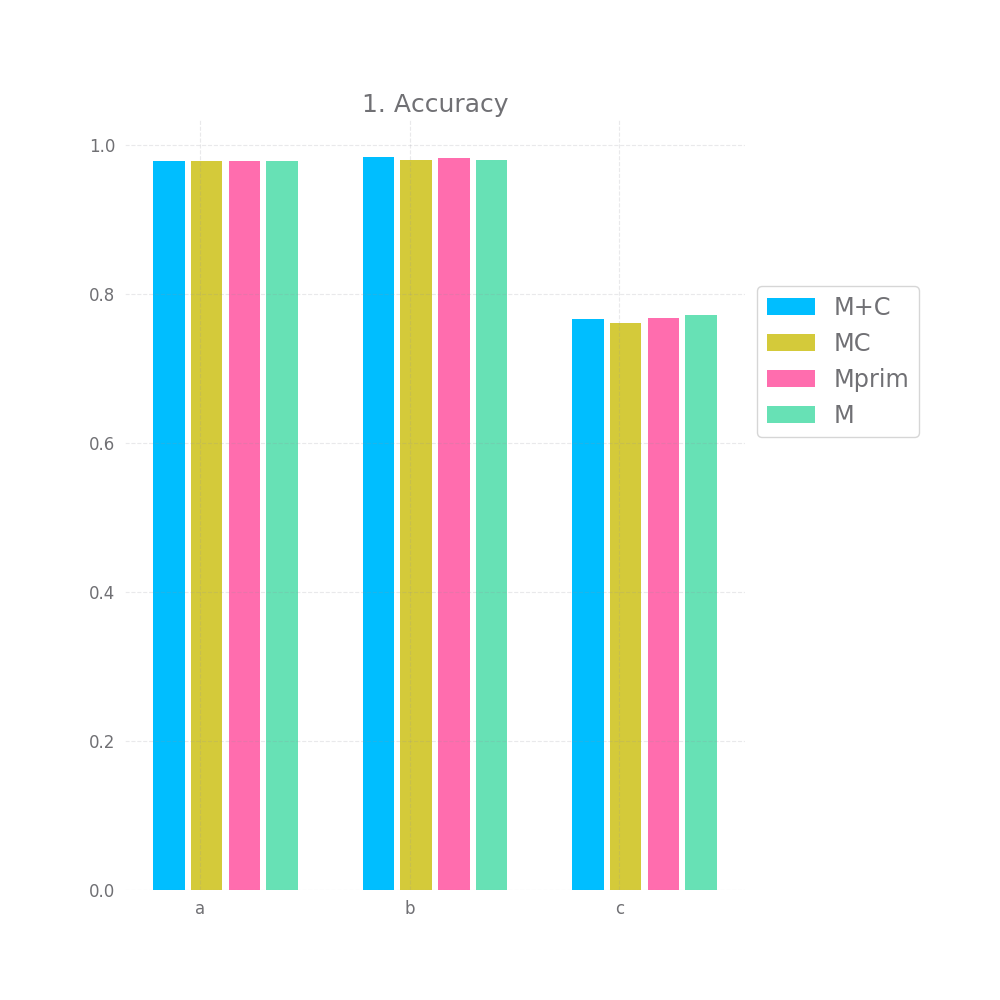 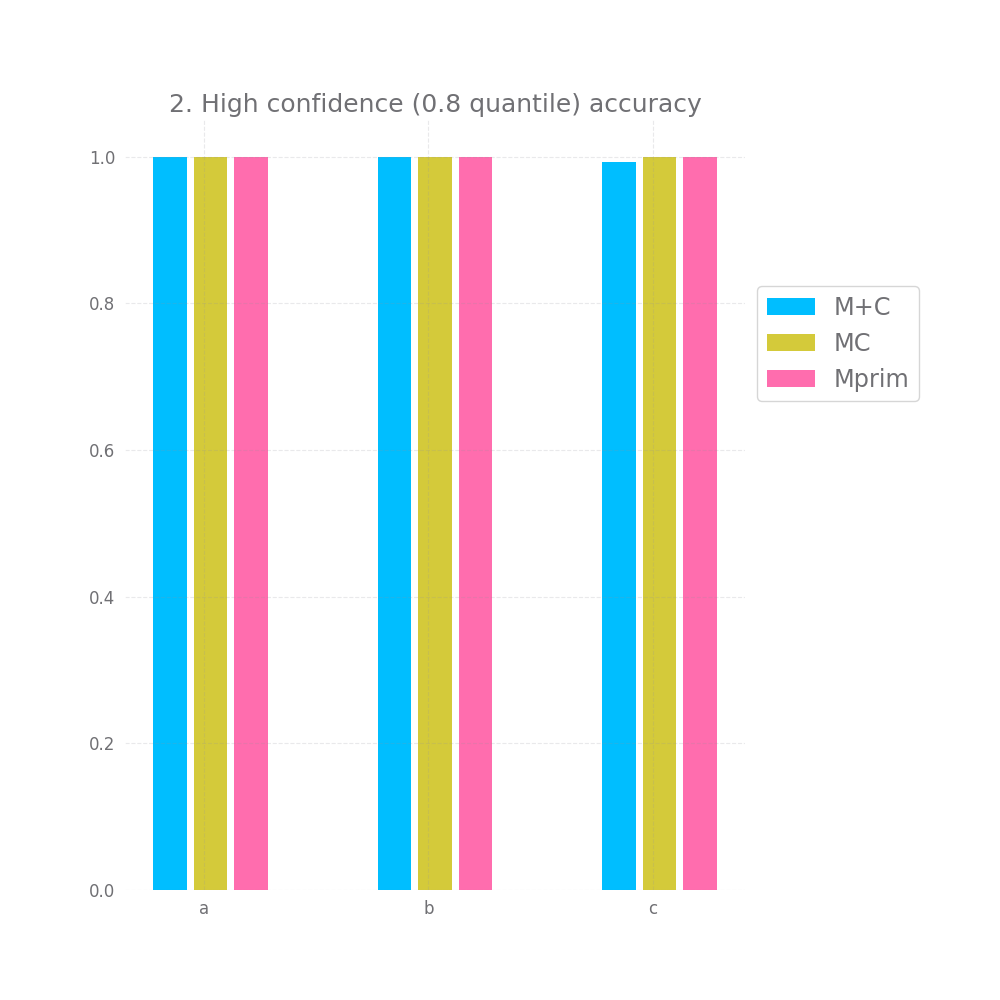 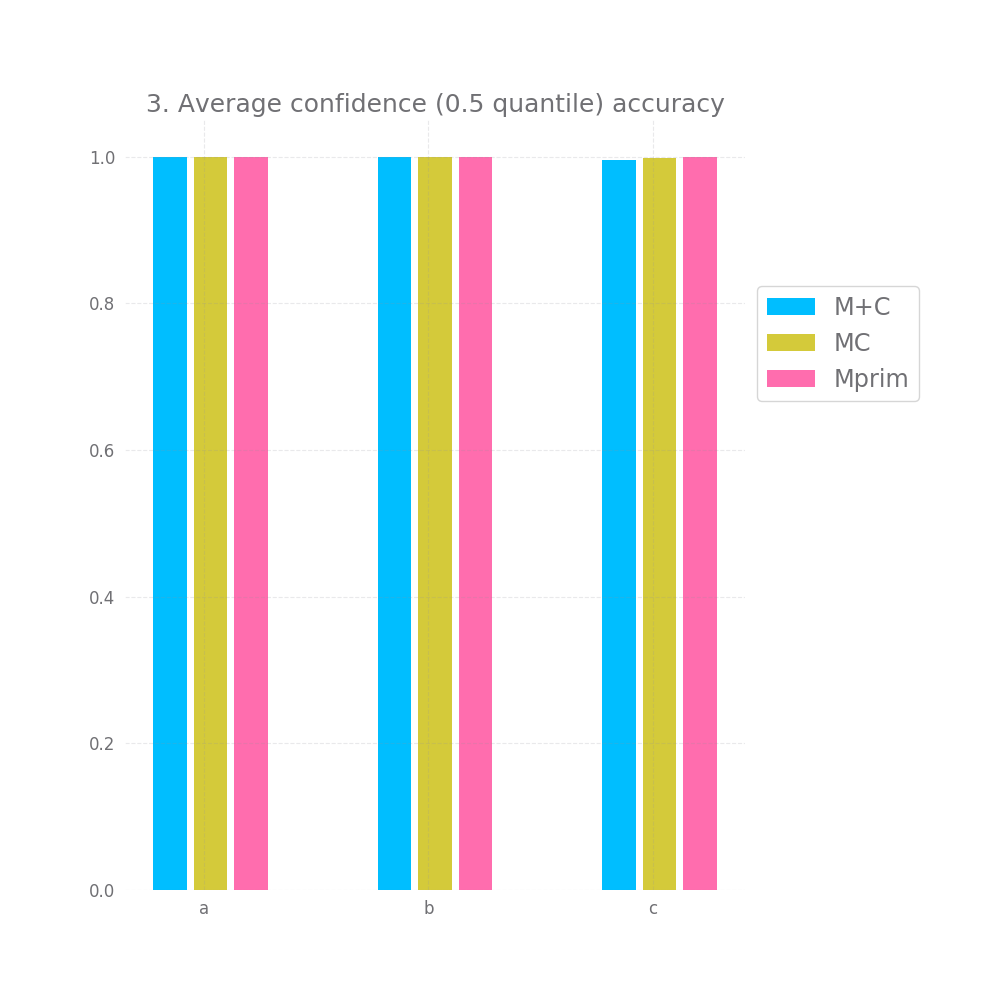 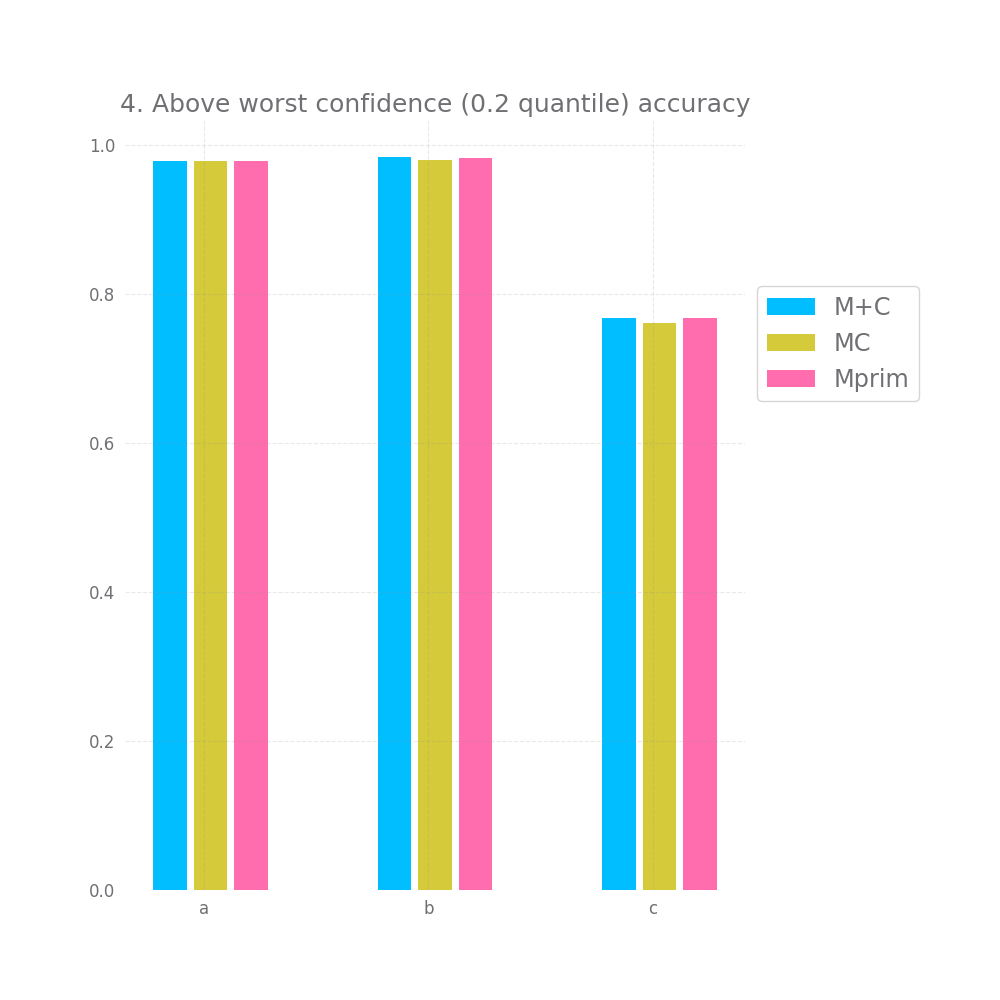 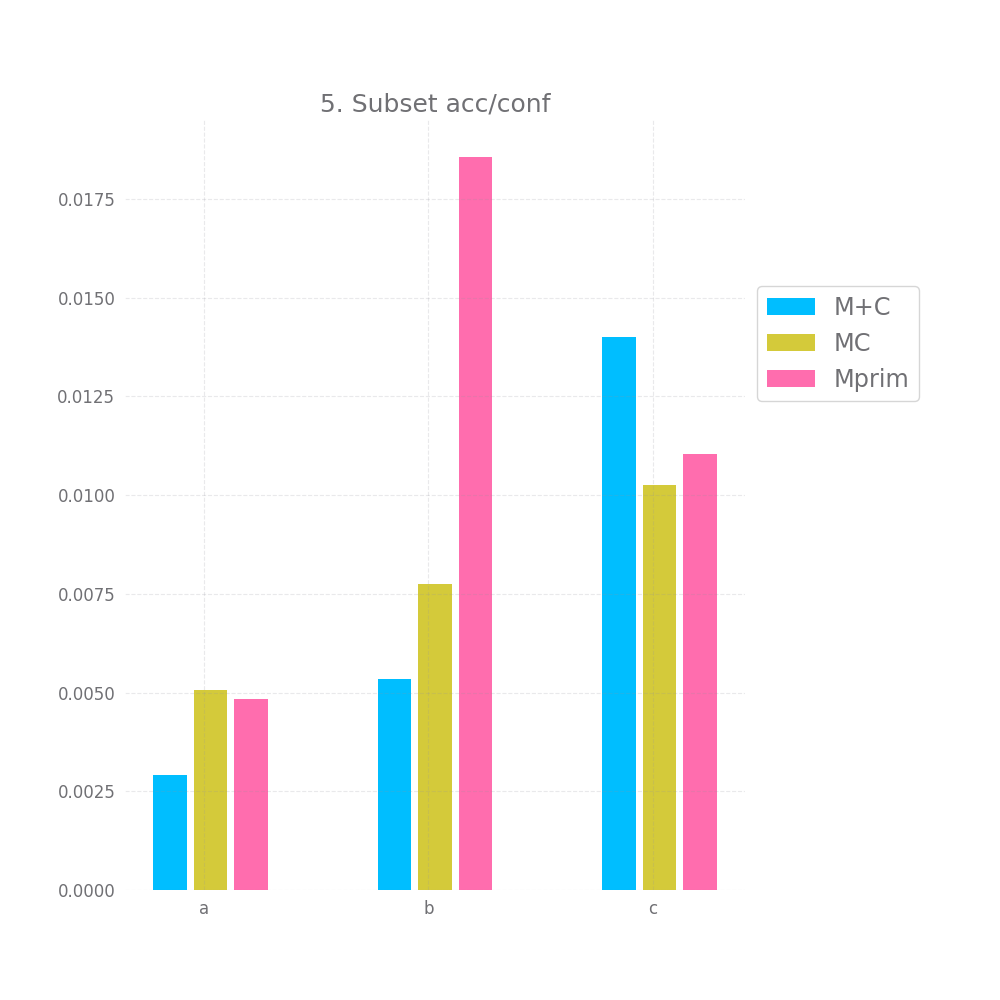 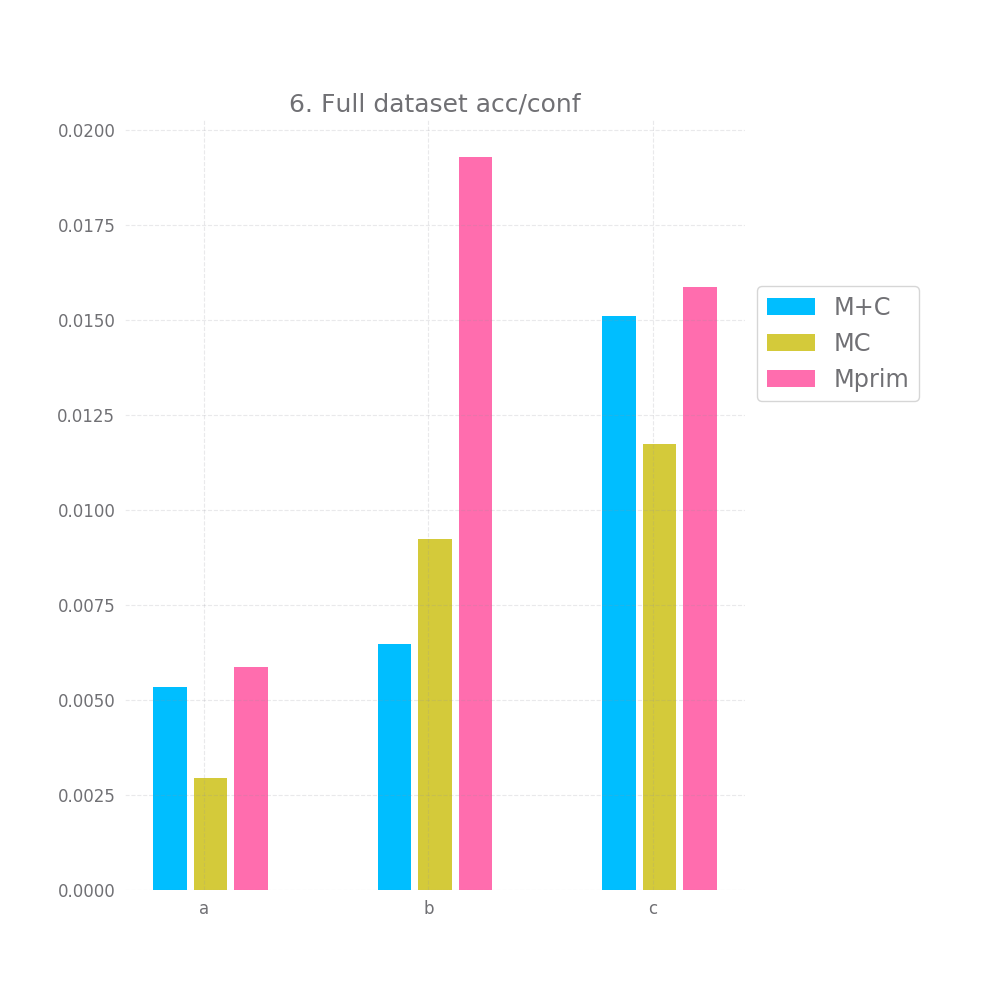 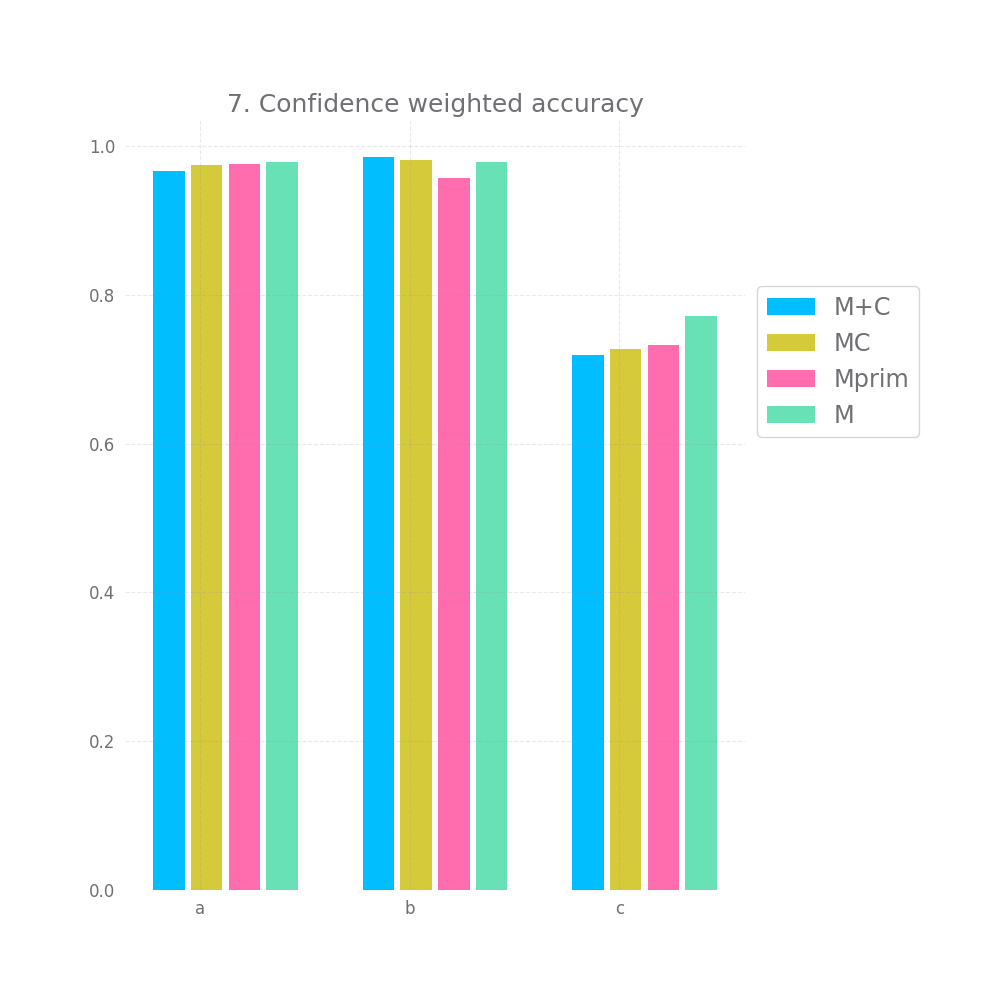 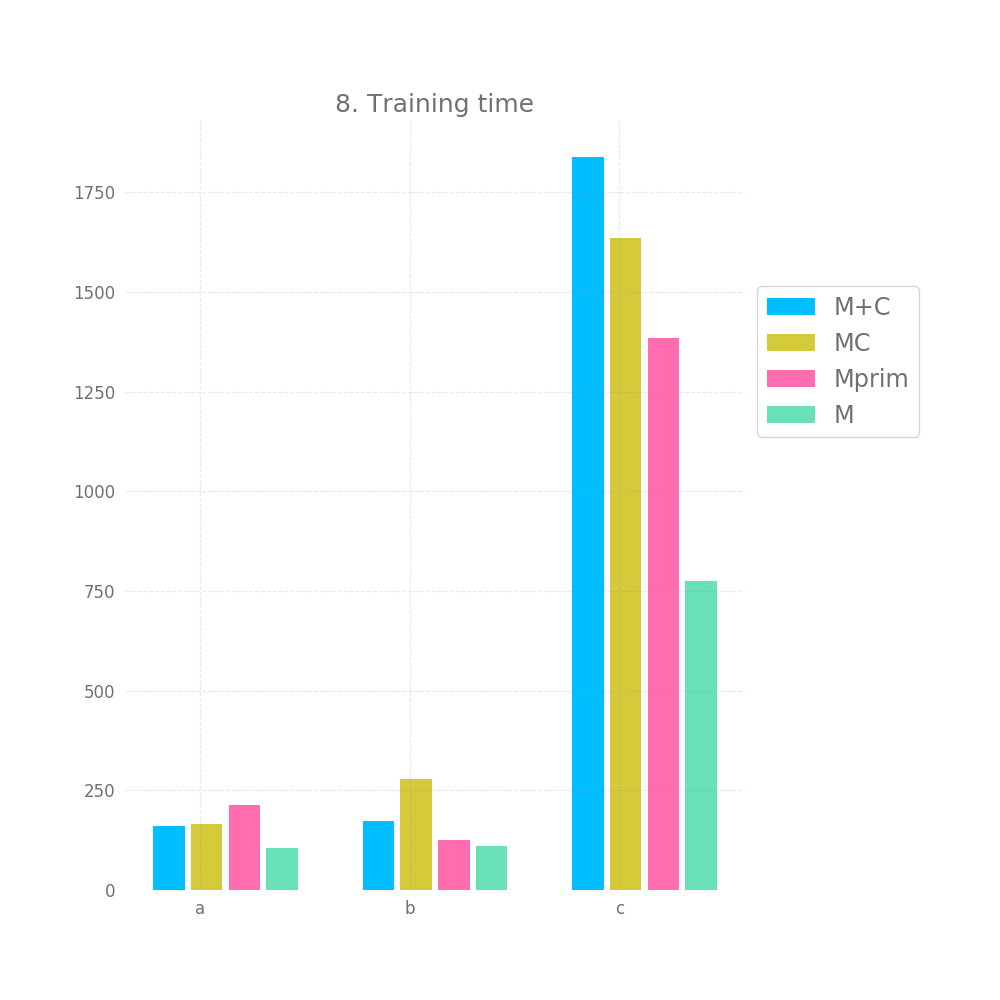 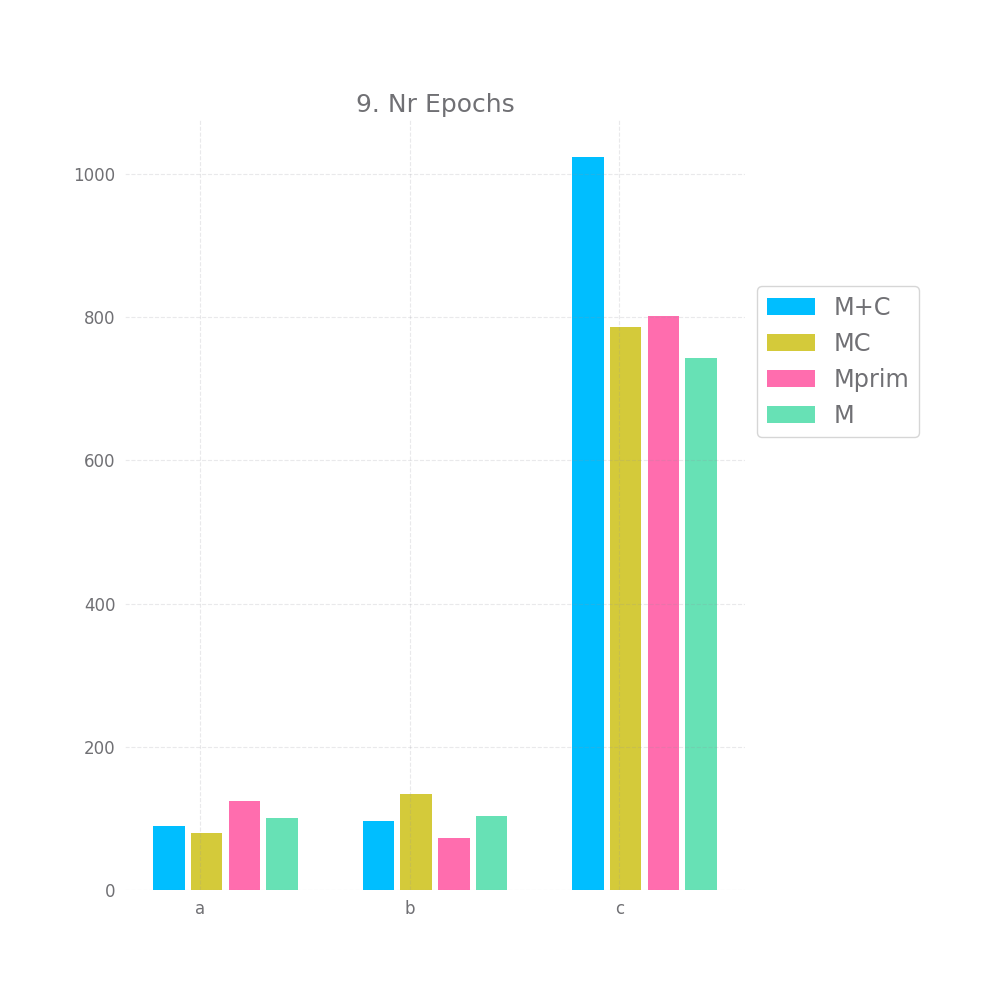 Let's explore this one by one:

This is somewhat disappointing, but to be fair, the models are doing close-to-perfect here anyway, so it could be hard for Mprim or MC to improve anything. Well, except for the c dataset, in theory, one should be able to get an accuracy of ~89% of the c dataset, M's accuracy however is only 75%. So one would expect this is where Mprim or MC could shine, but they don't. There's a 1% improvement with Mprim and even an insignificant drop with MC compared to M.

There's a bit of hope when we look at graphs nr 2 and 3 measuring the accuracy for high and medium confidence predictions. On all 3 datasets and for all 3 approaches both of these are basically 100%. However, this doesn't hold for graph nr 4, where we take all but the bottom 20% predictions in terms of confidence, here we have a very small accuracy improvement, but it's so tiny it might as well be noise.

This is not quite the case here, but it's close enough, we have a difference between 0.2 and 1.4% between the mean confidence and the accuracy... not bad. Also, keep in mind that we test this both on the full testing datasets and a random subset, so this is likely to generalize to any large enough subset of data similar to the training data. Of course, "large enough" and "similar" are basically handwavey terms here.

Lastly, we look at 7 and observe that weighting the accuracy by the confidence doesn't improve accuracy, if anything it seems to make it insignificantly smaller. There might be other ways to observe an effect size here, namely only selecting values with a low confidence, but I'm still rather disappointed by this turnout.

Finally, the training time and number of epochs is unexpected, I'd have assumed Mprim takes the longest to converge, followed by MC and that M+C is the fastest. However, on the c dataset we observe the exact opposite. This might serve as some indication that MC and Mprim can "kind of figure out" the random element earlier, but I don't want to read too much into it.

Let's also take a look at the relative plots: 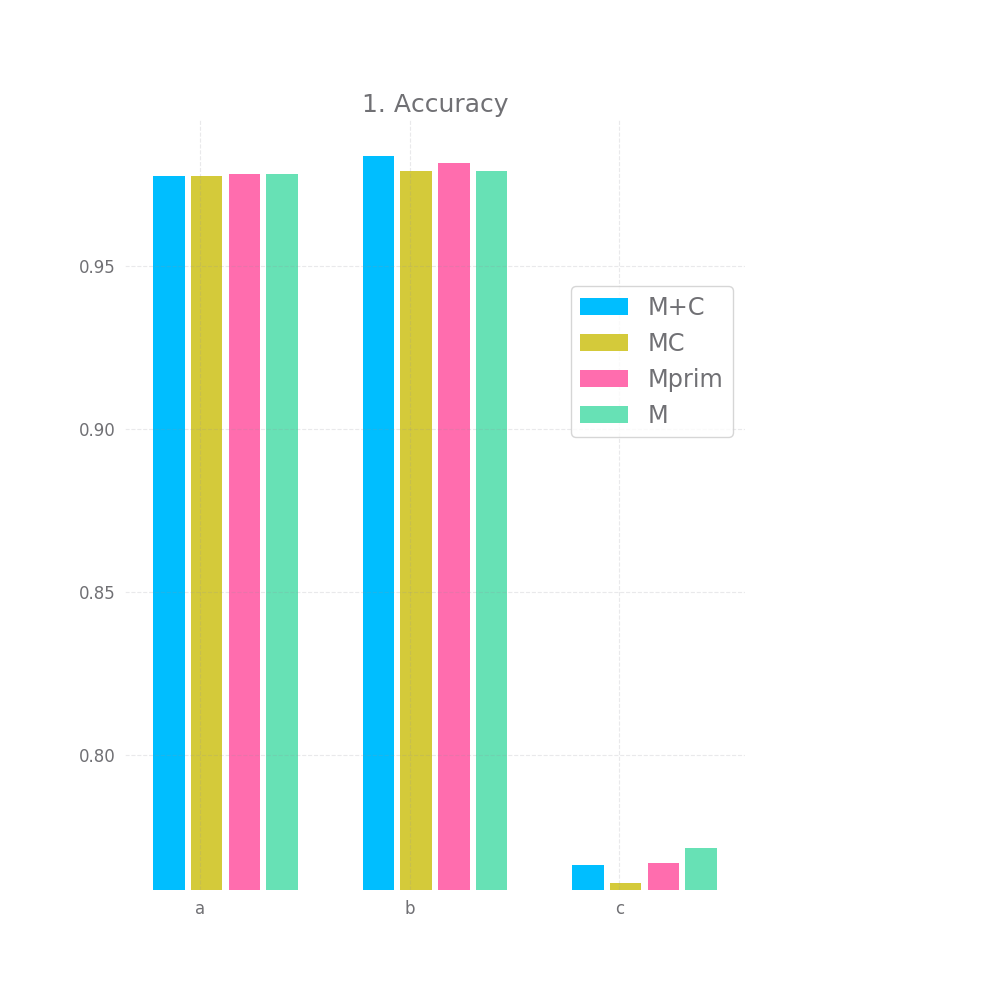 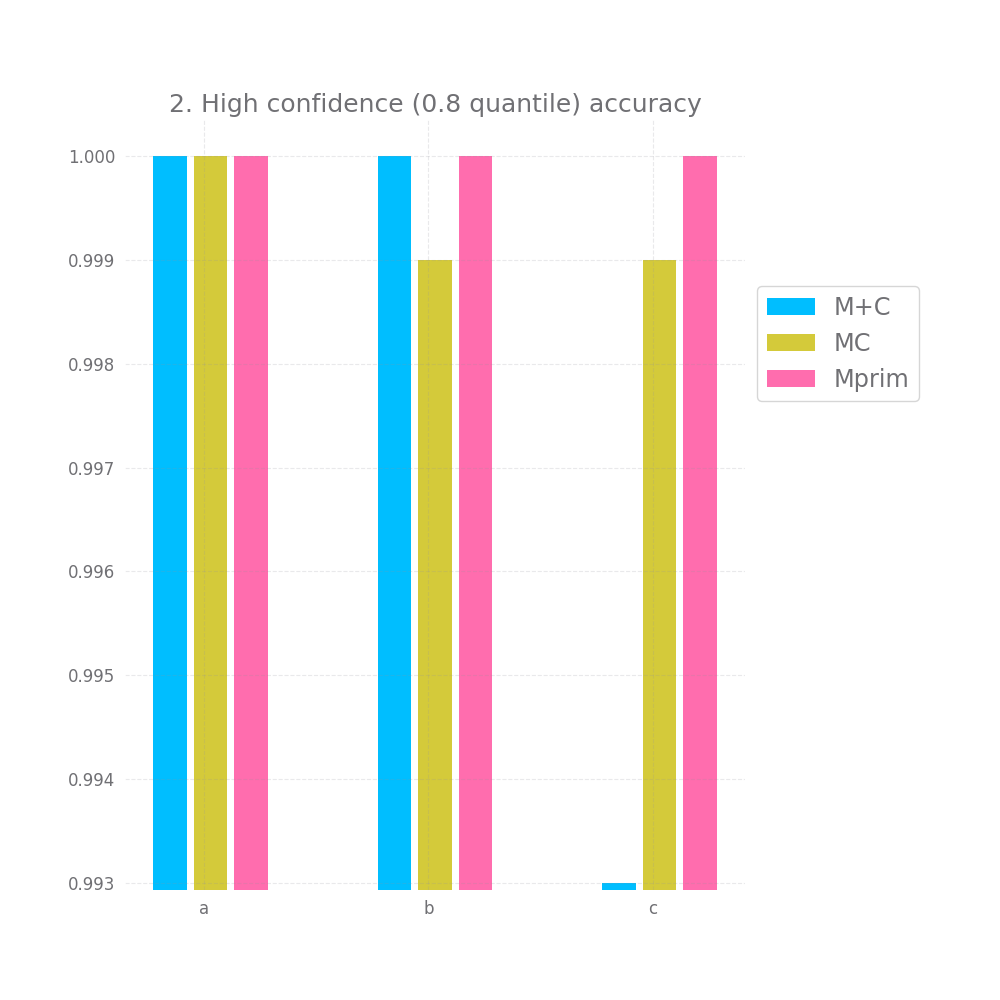 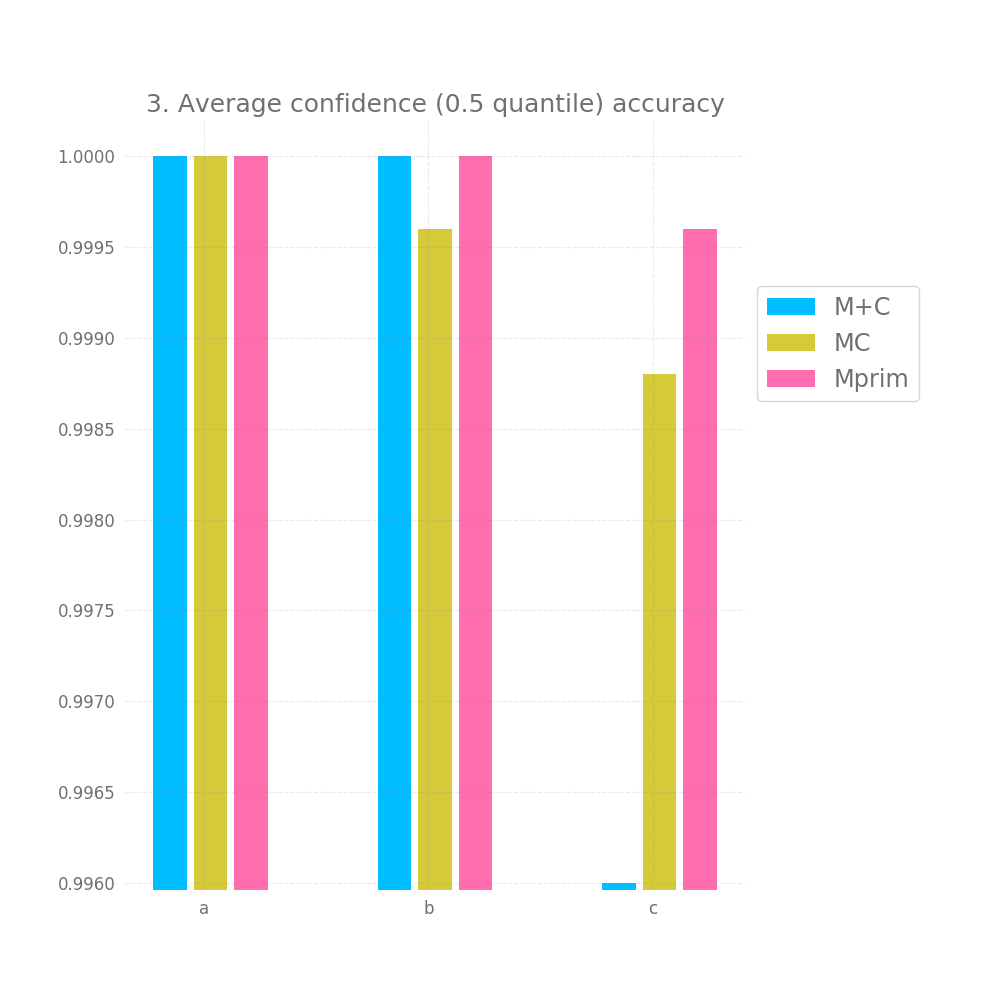 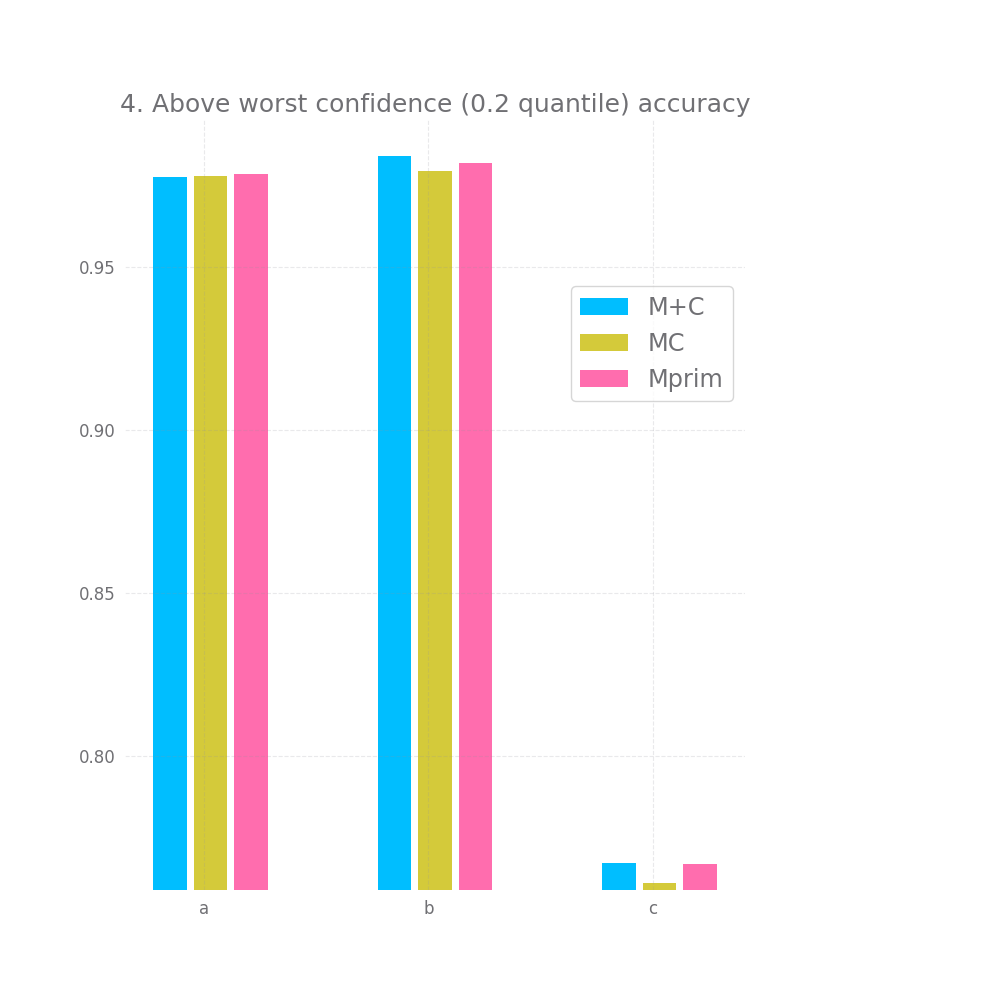 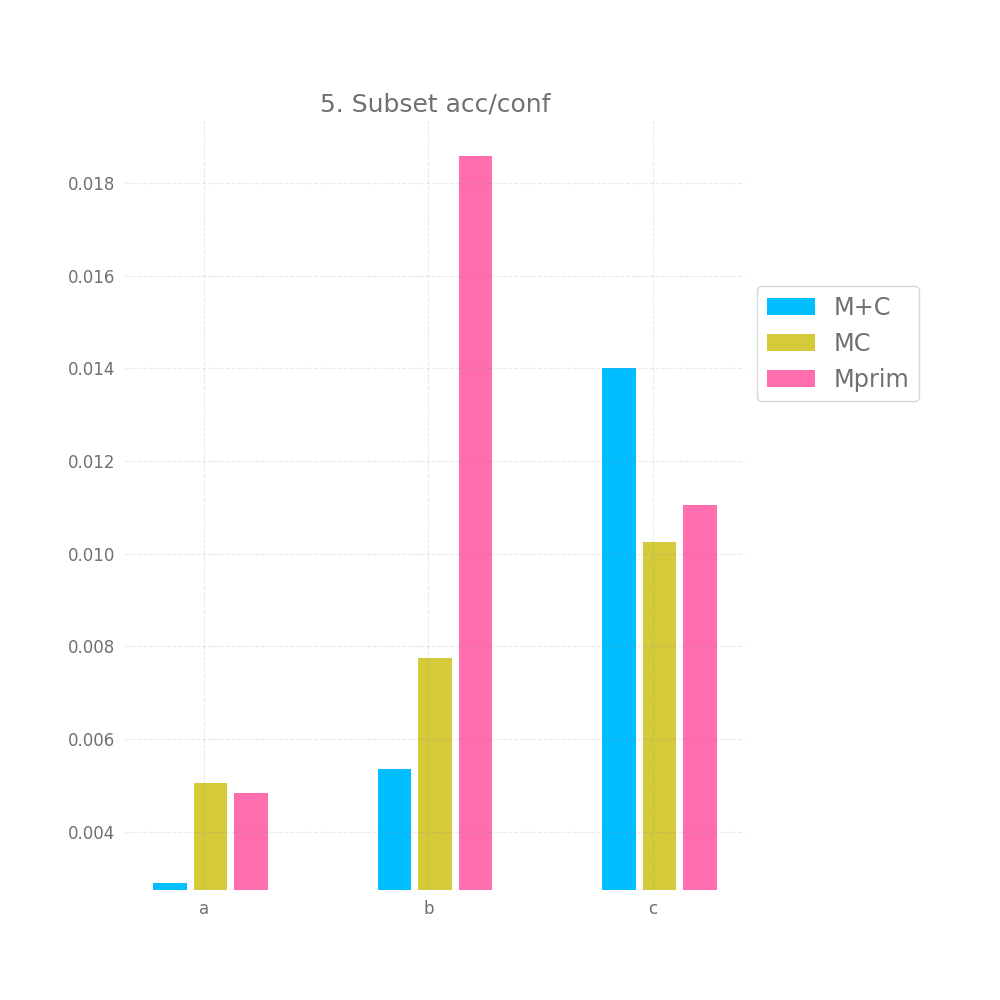 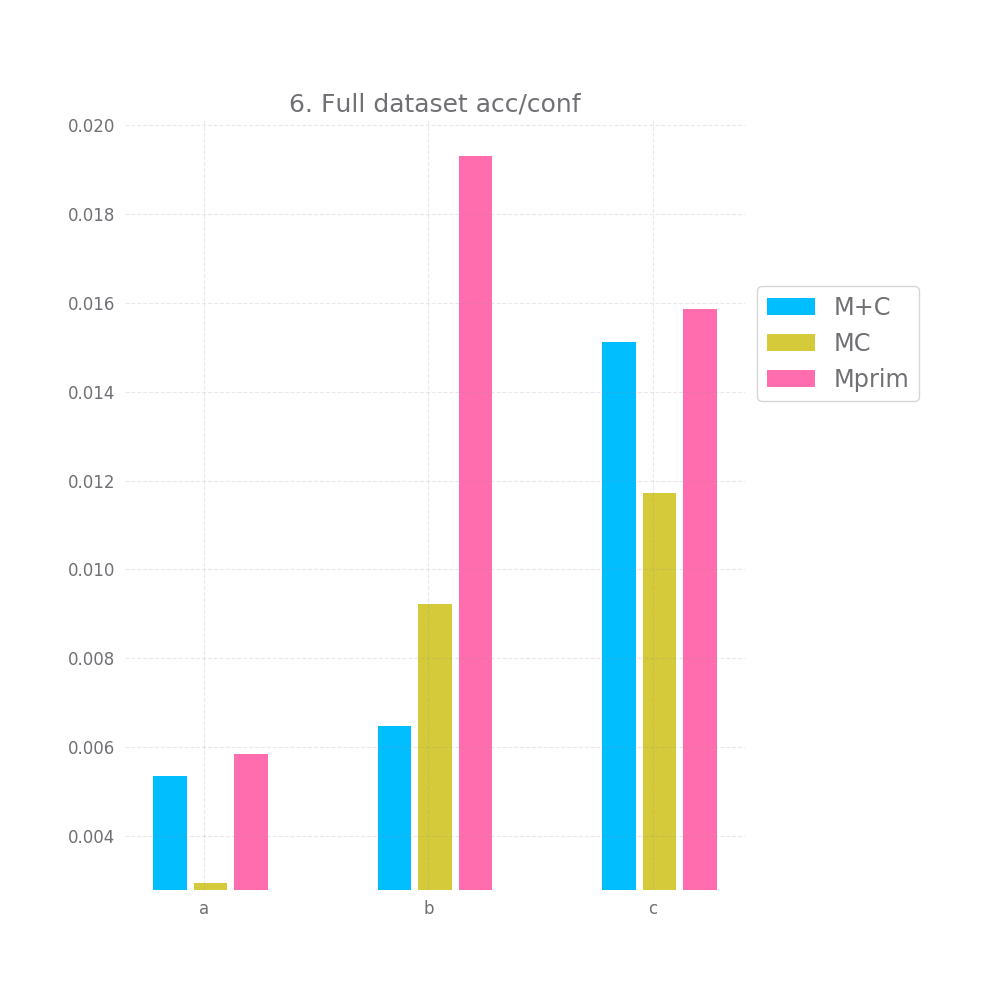 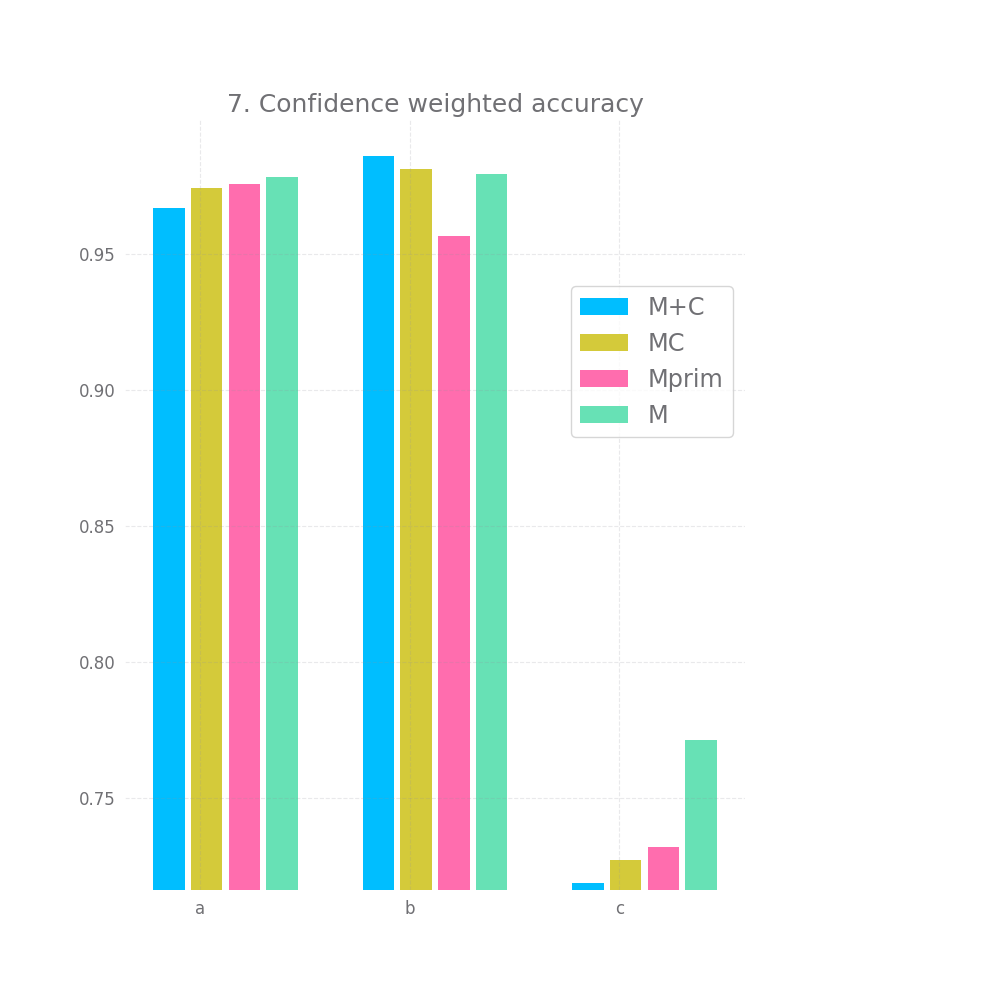 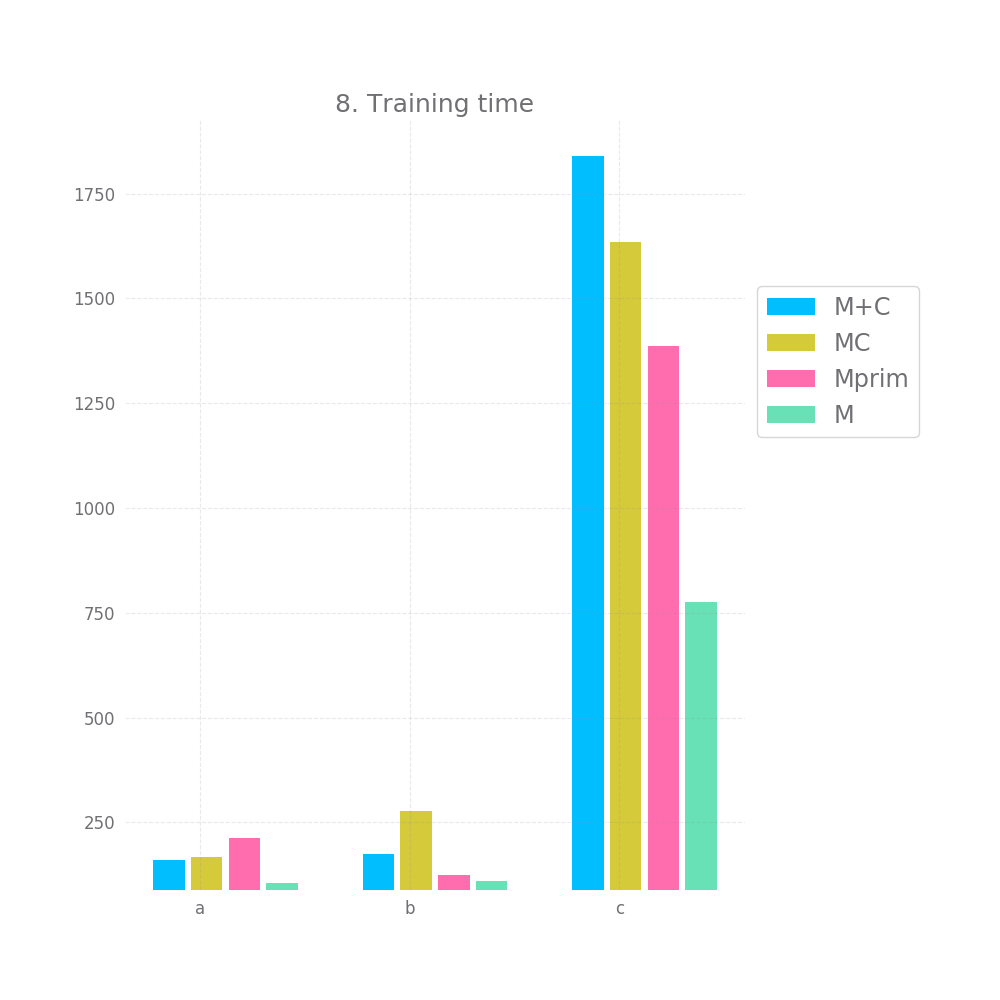 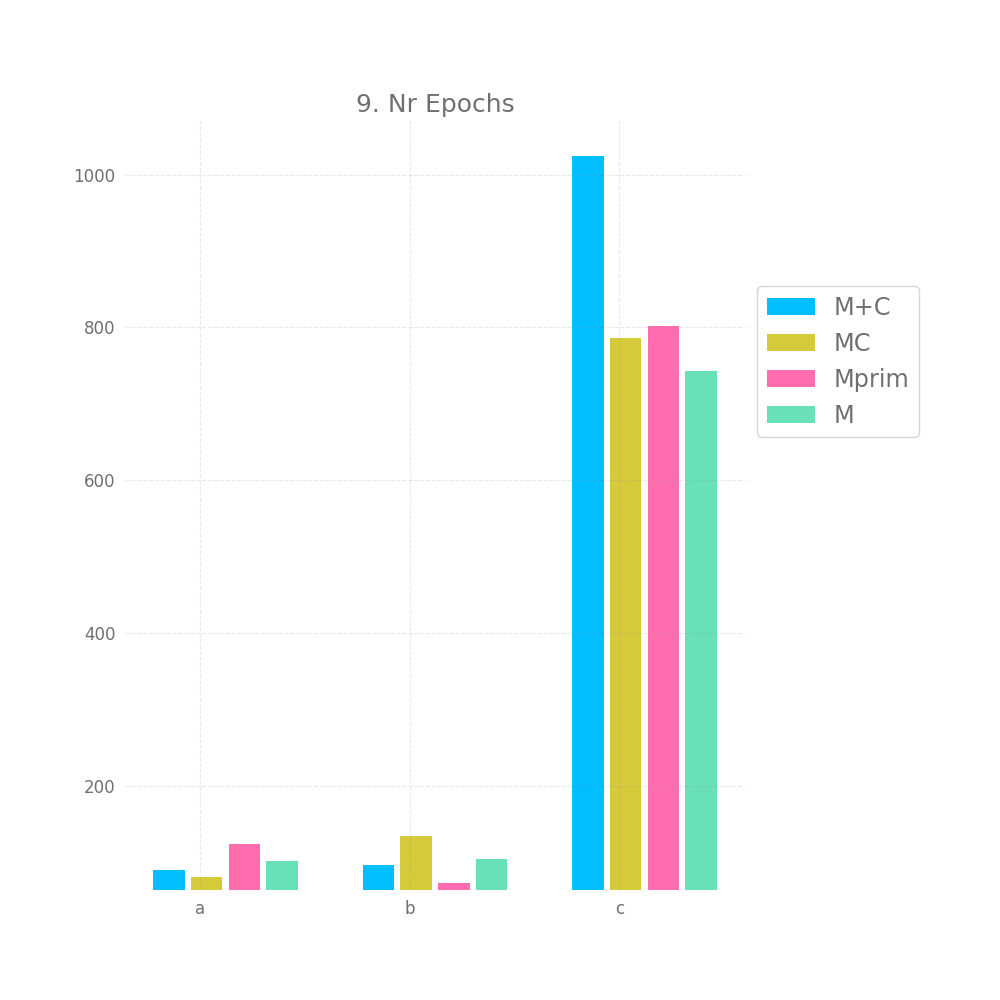 III A broader look at the results

Ok, before I draw any conclusion I also want to do a brief analysis of all the data points I collected. Maybe there's some more signal in all that noise.

Again, remember I have datasets a,b, and c generated using a linear polynomial and polynomial-with-coefficients formula for degrees 3,4,5 and 6. That's 44 more datasets to draw some conclusions from.

I'm going to average out all the scores per model for each dataset and for all datasets combined to see if I find any outliers. I also tried finding surprisingly high scores (e.g. MC performing 10% better than M+C and Mprim on a specific dataset) but couldn't find any, however, feel free to run the code for yourself and dig through my results or generate your own.

That aside being said:

1. On all datasets combined

M+C and MC perform about equally on the acc/conf tradeoff both on the whole dataset and on the sample, being off by 2-3.7%. Mprim however is much worst and on average it's off by ~23%.

When we "weight" the accuracy using the confidence, the resulting accuracy is still slightly worst for all models compared to the original M. However, again, Mprim falls behind both M+C and MC.

The pattern for the accuracy metric changes a bit, with MC being above or about the same as M+C and even managing to beat M in overall accuracy. But the difference is not that significant

Mprim performs horribly, with errors > 45% in the accuracy/confidence tradeoff, both M+C and MC perform close to perfect, with M+C having errors ~3% and MC ~0.5%.

The story for weighted accuracy stays the same.

The pattern for accuracy has Mprim and M+C tied here, with MC being ~4% worst on the overall accuracy and the accuracy of the top 80% of predictions chosen by confidence (i.e. metric 4, above worst confidence).

The acc/conf metric is about the same for all models, nearing a perfect match with errors in the 0.x% and 0.0x%.

The story for weighted accuracy stays the same.

This is the only dataset type that is impossible to perfectly predict, this is the kind of situation for which I'd expect confidence models to be relevant.

Average accuracy is abysmal for all models, ranging from 61% to 68%.

When looking at the accuracy of predictions picked by high confidence, for the 0.8 and 0.5 confidence quantile M+C has much better accuracy than Mprim and M+C

For the above worst confidence accuracy (0.2 quantile) all models perform equally badly, at ~73%, but this is still a 5% improvement over the original accuracy.

Finally, when looking at the confidence weighted accuracy, all 3 confidence models beat the standard accuracy metric, which is encouraging. MC does best, but only marginally better than Mprim.

On the above task, MC and M+C performed about equally well, with a potential edge going out to M+C. MPrim performed significantly worst on many of the datasets.

For MC and M+C, the average confidence matched the average accuracy with a < 0.05 error for the vast majority of datasets, which indicates some "correctness" regarding the confidence.

This is enough to motivate me to do a bit more digging, potentially using more rigorous experiments and more complex datasets on the idea of having a separate confidence-predicting network. Both the MC and M+C approach seem to be viable candidates here. Outputting confidence from the same model seems to show the worst performance than a separate confidence network.

On the whole, if people find this interesting I might run a more thorough experiment taking into account the above points. That being said, it doesn't seem like these "errors" should affect the data relevant for the conclusion too much, though they might be affecting the things presented in section III quite a lot.