Stupidity is safety from automation

One common myth that people believe is that “smart” people are least at risk of being automated.

I don’t put much trust in IQ, but for the sake of argument, let’s assume that we can think of general intelligence as a simple variable (G) which follows a normal~ish distribution in relation to a population.

Let’s further assume that general intelligence makes you good at jobs that involve a lot of thinking and that intelligent people are likely to take those jobs because they pay more, have an easier schedule and are more fulfilling. There might be janitors out there smarter than most biochemical researchers, but 9x% of biochemical researchers are smarter than 9x% of janitors.

I think that, for now, most people will roughly agree with this picture.

The point where people start getting things wrong is when they start assuming that, on average, the less intelligent you are the most likely you are to lose any potential jobs to automation. When most people think of automation risk in relation to intelligence they might envision this kind of gradient: 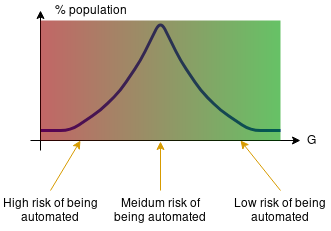 However, I think this is patently wrong and that a more realistic automation-risk gradient probably looks closer to this: 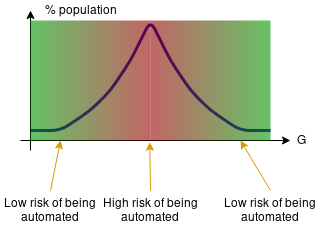 I think the main culprit for this is people’s misunderstanding of manual labor and what skills it requires.

When I say manual labor I don’t necessarily mean lifting heavy things, I mean anything that requires some sort of complex movement easily achievable by a human.

Being a nurse in an old people’s home or a kindergarten caretaker qualifies under this definition of “manual labor”, being an accountant or a programmer doesn’t. Obviously, every job has a degree of manual labor involved, but some (e.g. janitor) have much more than other (e.g. trader), so I'll go ahead and talk about it as a binary classification for now.

If we take our previous figure and try plotting “% of work that consists of manual labor” we might get something like this: 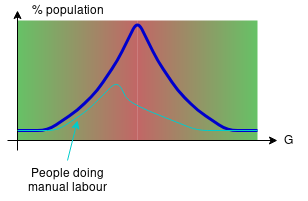 There’s a few features of“intellectual” labour which make it much easier to automated, at least in principle, than manual labour.

a) Intellectual labor is usually done on a computer, or at least heavily recorded in a digital format, thus we have plenty of data about what it involves.

b) Intellectual labor can be easily recorded.

It's much easier to describe in code the job of a risk-analyst than that of a plumber, because it's very easy to record what a risk analyst does; because by its very nature the work has to be well documented; and because most of what a risk analyst does boils down to receiving inputs and providing outputs into a computer, a thing which computers are fundamentally good at. What a plumber does boils down to a series of interactions with the physical world, something computers can't do on their own.

The idea of building a machine that’s as good at solving linear algebra problems as a human is fairly trivial. Indeed, except for a few edge cases it’s basically a “solved” problem.

Working with linear algebra is not something our brains are optimized for, it requires a certain mental age and years of training for a human to understand an equation which can be solved with one line of code. On the other hand, a 4 year old would probably put a billion-dollar robot to shame when it comes to the walking through a bumpy forest or climbing a tree or picking up an object without destroying it.

Humans are good at walking and bad at math not because the latter is harder in any absolute way, but because 4 billion years of evolution optimized then for moving around an environment. On the other hand, calculus came about less than a millennium ago, so it’s really a miracle that we can solve calculus problems.

Automating an intellectual task is rather cheap, it only requires a piece of software and some computational hardware to run it on. If we are unsure the implementation is working we can test it again and again with minimal cost just by feeding some input data and checking we get the correct output.

Automating a manual task also requires some mechanical hardware, the kind that can manipulate the real world. Also, it’s extremely expensive to test a real-world agent, since a lot of failures involve a lot of work repairing the agent and resetting the testing environment.

Thus, manual labor usually costs more to automate both in terms of R&D and in terms of manufacturing actual physical products.

Since most intellectual labor is purely digital, it’s basically impossible to know if a human or a machine is doing it. Even if you pass a law saying that you can’t automate the jobs of programmers, there’s no way of really telling whether a certain piece of code was written by a human or a machine. Any such law would be too blurry to enforce; questions like: “Does automation include making programmers use certain high-level libraries or IDEs?” would make it impossible to accurately judge.

On the other hand, it’s pretty easy to make sure manual jobs don’t get automated. Want to stop self-driving trucks? It takes just a vote and few minutes to clearly say “A human with a truck driving license must be present behind the wheel of a moving truck 100% of the time”.

Compare driving, a relatively easy manual job, and web development, a relatively hard intellectual job. We’ve poured trillions of dollars into automated driving and the best we have is "as good as a human, given a restricted range of environments and weather conditions." On the other hand, it takes a few dozen programmers and one or two years of work to create a product that automates 99% of what a web developer would have done in the early 2000s.

It's very easy to envision how a country could decide on banning self-driving cars, but it’s pretty unrealistic to expect any legislative body even considering a ban on Squarespace.

But you say, it might indeed be true that most manual jobs are harder to automate than most “thinking” jobs, however, if you automate away the “smart” people they will just move into manual jobs, which they will do better.

However, people don’t take into account one thing when considering intelligence. 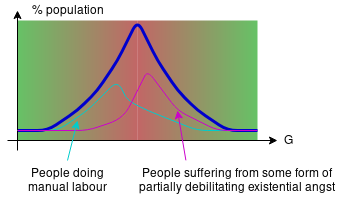 Intelligent people are much more likely to fall prey to existential angst - things like burnout, depression, anxiety, a nonsensical quest for social status or acceptance and a host of other issues that seem to be heavily correlated with the ability to observe the absurdism of the human condition and the risks and tragedies involved in daily life.

You might be able to train a bank middle-manager to become a fast-food cook, and if he tried really hard he could probably be Burger King’s regional employee of the month. But… is that how a bank manager would behave once told he’s been replaced by some automatic differentiation machine and must now stay 8hr/day in a hot kitchen being screamed at, for 1/5th of his paycheck? I really doubt it.

Even provided that someone very intelligent never got a taste of “thinking” work and did manual labor for all his life, his intelligence might be more of a curse than an advantage.

An IQ of 130 doesn’t make you much better at painting houses than an IQ of 80, it does however make you more likely to consider the pointlessness of it all and have bouts of depression that make you take days off and fall behind. It makes your more likely to enter in an argument due to your boss making a “stupid decision” and risk getting fired. It makes you more likely to be dissatisfied and try to change your job, partially losing the advantage of all the experience gained in that field.

Honestly, I'm unsure why the idea that the smarter you are the safer you are from automation would take hold in anyone's mind.

It might be that people confuse a drop in manufacturing jobs with automation, while it is actually caused mainly by richer countries outsourcing them to poorer countries.

It might be because when they think of manual jobs, most people imagine assembly line workers, not cooks, handymen, foresters, nurses, caretakers, fishermen and tailors.

Historically, automation has mostly affected manual work, but it's because computers became available only very recently. Computers are a game-changer when it comes to automating everything, but they are best suited at automating away thinking work; indeed, that's most of the work they've been used to automate in the past.

That’s not to say there won’t be hard to automate intellectual tasks or easy to automate manual tasks. However, taking a 10-years perspective to life, I’d be much more worried about getting replaced by robots as a STEM honors graduate than as a somewhat-slow-but-likeable-and-carefree roofer.